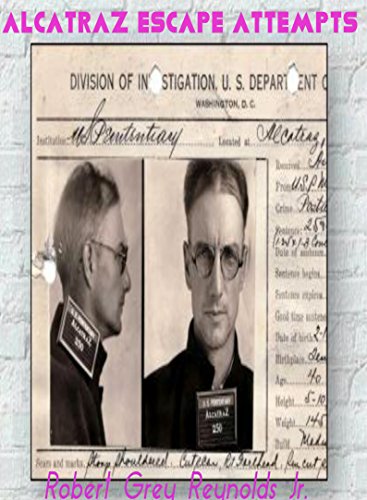 Alcatraz opened in 1934 as an institution that confined the most incorrigible and notorious Federal prisoners. Men like Al Capone and Doc Barker who had evaded the law for years and, in many cases, were wanted as Public Enemy #1 by the FBI. My e-book looks closely at the attempts to break out of Alcatraz, which was nearly escape proof. The institution was an early example of advanced technology. Guards rotated around the clock, locked inside a control room where buttons and levers could be depressed that opened entire cell blocks. Broadway, as it was called by convicts, was the main thoroughfare of triple tiered cell blocks inside of Alcatraz. If a prisoner was fortunate enough to overpower enough guards to gain access to the outer yard, there still remained guards there and in the surrounding towers. Timing an escape was essential if escapees wanted to have an incoming tide that would give them the depth they needed to swim. Otherwise they confronted craggy rocks that weren’t conducive to swimming. Then there were the chilly waters with an average temperature of around 54 degrees. The San Francisco mainland was almost a mile away and swirling waters and fog confronted would be swimmers as did rifle bullets that could be fired by guards. I researched my book from clippings of news accounts written by reporters who witnessed the 1946 armed Alcatraz revolt. I also used numerous Associated Press and United Press first hand accounts of attempted escapes and how they had been foiled.