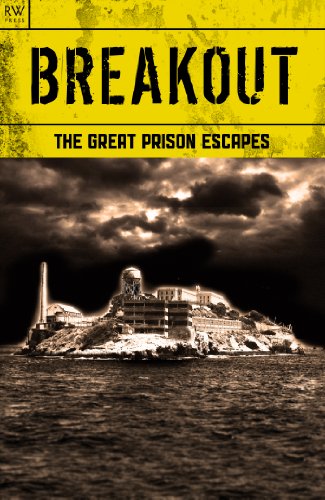 As the famous line in the song Me and Bobby McGhee says, ‘Freedom’s just another word for nothing left to lose’, and many of the men featured in Breakout: Infamous Prison Escapes, had nothing left to lose. When the prison doors clanged shut behind them, they had indeed lost everything and were left with nothing, apart from some stark choices. Either they could resign themselves to long years behind bars or behind the razor wire of a prisoner of war camp, or they could develop the steely determination, cultivate the mental focus and begin the meticulous planning needed to arrive at the momentous day when they would finally breakout and breathe the sweet air of freedom once again.
No suspicions could be raised, no hint given, that a hole was being gouged out of a ceiling, as in the case of serial killer Ted Bundy when he escaped from his Colorado cell – an escape that led to his freedom, but also brought more murders. At both Alcatraz and in jailed drug smuggler Billy Hayes’ Turkish prison, for example, saw-marks were cleverly disguised with grease, polish or ash-covered putty – saw marks that would surely arouse the guards’ suspicions. Deception such as that takes confidence, however, like that displayed by notorious American bank robber John Dillinger who sculpted a handgun from a piece of wood and used it to get out of Crown Point prison in Indiana.

Author Biography
Gordon Kerr was born in the Scottish new town of East Kilbride and worked in the wine trade and then bookselling and publishing before becoming a full-time writer. He is the author of numerous books in a variety of genres, including art, history, true crime, travel and humour. He has a wife and two children and lives in Hampshire and – when he can – South West France.